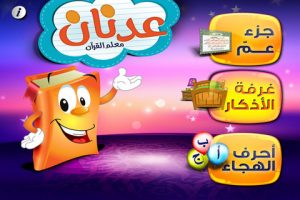 As interested in technology and online content, my mind is very much concerned with content directed at children, especially with the spread of smart devices, which have become accessible to children of all ages. Inappropriate content may be dangerous, not in itself, but by presenting it to the child at this age in which his personality is formed, so it is difficult to change his convictions at a later time

Offensive scenes on YouTube, sexual content, cheap goods from any content that was intended for commercial exploitation only away from the educational aspects is content that must be kept away from children in the manner of finding an appropriate alternative, not with a ban that did not and will not be the solution, especially when talking about online content and applications smart phones.

One of the beautiful experiences in this regard is the “ Adnan Quran Teacher ” application, which was produced by Siddiq Abdullah Al-Youssef ( @ aiyious ) and works on the iOS environment in two free and paid versions. The beauty of this application is that it is directed directly to the child with a nice user interface that is friendly to children.

The experience can be presented to more and larger topics, and it will be an alternative option for those who complain about their children’s attachment to YouTube and the difficulty of following up the content they watch, and the contribution in this field can be considered under the item of social participation, which some major companies participate in, such as banks and telecommunications companies who shower us Thank you for the applications of the Holy Quran, which is good and there is no doubt, but diversification is required and targeting different segments is a good thing if we take into account the saturation of the application market of free and paid Quranic Quran programs.

under the item of social participation, by developing targeted applications that educators and specialists participate in preparing for them, that have a constructive effect in directing technology to be a helpful and constructive factor in raising children instead of the other way around.

How much do we need like Dr. Khaled Elnemer @ALNEMERK?

What is stc’s Maraphone app, and why?