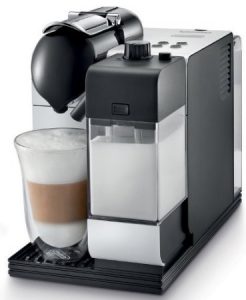 In the beginning, I must explain to you that I am new to black coffee (American), and most of what I have been used to throughout my life is Arabic coffee only, as I did not like black coffee at all. A year from now, at a stage that witnessed many work pressures and various engagements, interspersed with very outrageous headaches, I decided to drink black coffee at work.The beginning was a coffee of less than average quality, but it served the purpose, and although I still did not like the taste of that coffee, I liked its effect, so the issue developed from a cup and two to 4 per day within 9 hours only. So it is natural for me to look for a better option for coffee, so the co-workers’ choice fell on the Nespresso Lattissima capsule:

Until that moment, I thought that this machine would supply me my American black coffee, but it turned out that I was ignorant of the simplest basics of coffee until the very dear Abdullah Al-Dowish @AbdDoweesh came and   explained to me the following, coffee is of two types: Espresso is a very strong coffee that is used with dairy products such as cappuccino, latte and others.

Black coffee. This is American coffee. It is prepared by distillation or by pressing.The important thing is that the coffee that is used to prepare espresso and its products cannot bring you black American coffee, here you learned the first lesson in the ABCs of coffee. I was looking for a better option until I settled on my opinion on the  Capresso 465 CoffeeTeam TS.  It has the advantage of grinding coffee before preparing it, which guarantees you a delicious taste of your morning coffee, in addition to the fact that the coffee pot is a “thermos” in essence, which keeps the coffee hot for some time.

The machine is very beautiful, it grinds the coffee in five levels (very fine to very coarse) and it can be timed to brew coffee as it is in most other coffee machines. It remains to determine what your favorite coffee is and where to buy it. I’ll be back in a later post to talk about the elegant iLLy x7.1 espresso machine

It remains to point out that I recently suffered from a blood pressure disorder, and heart palpitations, it turned out later that it is one of the effects of the large and concentrated amounts of caffeine that I drink daily, so for health reasons and a week ago I committed to only one cup of black coffee, pay attention to your health You, too, is harmful when caffeine is in excess of recognized medicinal limits.

Real estate on the web, experience @SaudiSale as an example!

How much do we need like Dr. Khaled Elnemer @ALNEMERK?